Written by Madison School of Healthcare On Tuesday, 02 August 2016. Posted in Nursing 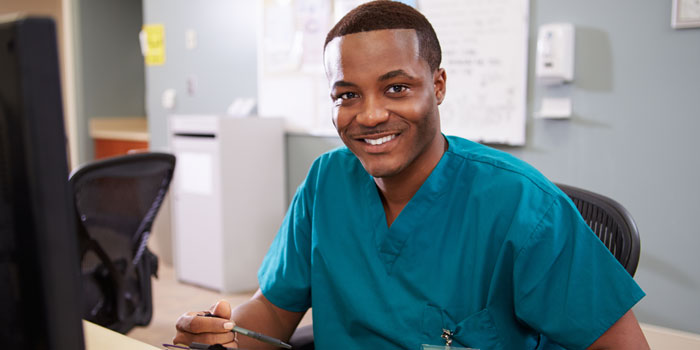 When a patient goes to the doctor or hospital they often expect to encounter a female nurse, and are surprised when a male nurse walks in to begin discussing their medical history. This makes some sense—women make up 91 percent of all U.S. nurses, according to the U.S. Census Bureau’s Men in Nursing Occupations. But what about that other 9 percent?

In previous decades, legal barriers kept men out of the nursing field. Many nursing schools even refused to admit men. But today, things have changed. Stereotypes are being shattered by the day and men in nursing are breaking these out-of-date gender roles too.

While a male nurse in healthcare may seem like one in a million, he is actually one of more than 330,000 male nurses in the U.S. As more men choose nursing as a profession, here are five things they want you to know:

Society often views women as being more caring than men, which can make work as a male nurse tough. But men who enter the nursing profession do so because of their desire to care for patients. They are just as committed to the goal to provide quality care to each patient they encounter as their female counterparts.

People often think that male nurses chose the profession because they didn’t get into medical school. While the situation is certainly possible, numerous factors make students think twice about medical school. The truth of the matter is that nursing students, male or female, go to school because they want to become nurses.

3. Male nurses are bringing men back into nursing.

The world’s first nursing school opened in India in 250 B.C. and was attended by men, according to the Robert Wood Johnson Foundation. Now, nearly 2,000 years later, men are rejoining nursing to diversify the profession.

4. Male nurses provide unique perspectives that are needed in nursing.

The same Robert Wood Johnson Foundation article reports that patients are more receptive to healthcare providers of similar cultural backgrounds and genders. So, as U.S. demographics change, it is important that the nursing profession also becomes more heterogeneous. This puts male nurses in a good position to add different experience and perspectives that will help lead change and advance health.

5. They want more men to consider nursing as a career.

In the past 40 years, the number of men in nursing has nearly tripled in the United States, according to the “Men In Nursing” report from the U.S. Census Bureau. And this number is expected to increase since the U.S. Bureau of Labor Statistics predicts the nursing profession will grow by a whopping 16 percent between 2014 and 2024, for registered nurses, licensed practical and licensed vocational nurses.

No matter your gender, if you’re interested in becoming a nurse, now is one of the best times! You can add your voice and experience to the millions of nurses who pursue this passion every day. And if you already hold an associate’s degree, consider the opportunities you could gain by expanding your clinical knowledge through an online RN to BSN program.