It’s Never Too Late: Madison Student Earns BSN after a Decade in Nursing

Written by Madison School of Healthcare On Friday, 11 August 2017. Posted in Nursing, Stories

Jim Massey has worked in the healthcare industry for nearly 24 years. He worked as a medical assistant and a surgical technician before earning his associate degree and becoming a registered nurse (RN), a role he’s embraced for the past decade.

Jim worked as an ER nurse for most of his nursing career before transitioning to a case management nurse for an insurance company. Now, Jim is taking the next step in his career by earning his bachelor's degree through the RN to BSN program at Madison School of Healthcare of Ashworth College. 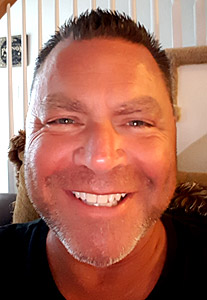 "I decided it was time to 'grow up' and finally get my bachelor's degree," he said with a laugh.

Jim's interest in healthcare spans back to his childhood. Diagnosed with type-1 diabetes at the age of five, he had several hospital visits over the years.

"I watched how the nurses would interact with me when I was a kid and just fell in love with it," he said. "That's part of what made me decide that it was the course I needed to take [in my career]."

When he decided to pursue an RN to BSN degree program, he said the Madison staff played a big role in his decision. Particularly, he's found great support in his academic advisor.

"I've enjoyed it so far, and I think the biggest component to me really liking it has been [my advisor] Sandy Kleiman because she is just absolutely wonderful," he said.

Jim was also drawn to the affordability and flexibility of the program. As a single father to two sons ages 17 and 18, as well as a full-time employee, Jim wanted a self-paced online program that would allow him to do coursework on his schedule.

In addition to receiving some tuition reimbursement through his current employer, Jim also actively sought out scholarship opportunities to pay for his education. He received a $3,000 scholarship for individuals pursuing careers in healthcare through an organization in his hometown of Lee's Summit, Missouri.

Long-term, Jim plans to continue his education and take on new roles as a healthcare professional. After a few more years working as a nurse, he plans on applying for a master's program to become a physician's assistant.

The nurses and doctors who treated Jim as a child and the connections they made continue to drive Jim's ultimate career goals. Wherever he ends up, Jim said he most looks forward to spending time "working with patients face-to-face."